“It is not easy receiving a diagnosis of Autism Spectrum Disorder for your child. Although it was a confirmation to the suspicions we had, as parents we were just hoping the pediatric neurologist would tell us our son had nothing and he’d grow out of his developmental delays and behavioral issues. His delays had included: minimal speech and using diapers at the age of four; while his behavior issues included: screaming, hitting, poor eye contact, poor attention, poor socialization, etc. We had no idea where to start after receiving the diagnosis. The neurologist recommended ABA therapy, but we quickly learned that not every therapy center provided this. A friend recommended we go see Jennifer Borr at Shine Bright Therapy. Immediately after our sons evaluation we felt some relief. He took well to Jennifer and the center itself. She provided a service plan and got to work with our son. Within days of his therapy commencing we saw improvements. We were able to potty train him in a few days, when past attempts had not worked. He began to use 2-word sentences and his vocabulary expanded. It has now been approximately 8 months since he began therapy with Jennifer and he is communicating wants and needs in 5+ word sentences. His screaming and hitting has subsided drastically. He can spell his name, name family and friends, greet people without being prompted constantly, play with other children, not just parallel to them. I can honestly go on and on about his improvement. I strongly believe that without Jennifer Borr and Shine Bright Therapy our son would not be where he is at today. Jennifer has given us hope that our son, although may never outgrow his diagnosis, will be able to reduce the developmental delays and behaviors that are associated with autism. We will forever be grateful to Jennifer Borr and Shine Bright Therapy for the improvements our son has done thus far and are hopeful for the future.”

“My daughter was diagnosed with autism at three and it was devastating. What added to the pain was the great confusion that resulted from trying to find the right treatment for her to move forward. All of a sudden it was a life of Speech Therapy, Occupational Therapy, and Pediatricians as well as the continuous concerns about sensory and behavioral issues. We had already met many therapists and while each has attempted to improve our daughter’s prospects, the standout has clearly been Jennifer Borr. She began treatment, and honestly, the difference was nothing short of stunning. Within six months, JM went from barely talking to stringing short sentences which has resulted in fewer meltdowns and frustration. Now she actually answers questions and JM knows that if she tries to use words she can get what she wants. She still becomes impatient in her effort to speak but she doesn’t give up and neither does Jennifer, no matter how hard our kid is on her. No therapist is a miracle worker, but on Jennifer’s 1st visit she had my JM doing things she had previously been unable to do, like sitting patiently on the floor, following instructions for an activity, accepting when the activity was finished and then helping to pack the activity away. Jennifer spends the first hour exclusively with my daughter and then she speaks with the family. She gradually gives explanations as to why JM behaves in the way that she does. Then Jennifer gives me a chance to raise any concerns I had during the week that had passed. One of the great advantages of having Jennifer was that all sessions were conducted in our home at a time that suited us. I have found her to be more effective than most speech therapists we have worked with in helping our daughter to improve her behavior and language skills. She is very creative and that is what keeps JM interested. I am thrilled to say that our lives have changed for the better. My daughter still has Autism (and always will), but we now know how to help her. I highly recommend the Shine Bright program to anyone with a child with any form of autism. It’s therapy for the entire family.”

“We knew something was wrong with our daughter when she was about 18 months old. She wouldn’t respond to her name and we thought she couldn’t hear us. After a lot of testing to rule out all sorts of things she was diagnosed with autism at the age of 3. She had been in speech therapy but was still unable to speak. A friend of mine recommended MOMSREACH.Org and that’s where I found Shine Bright Therapy. After speaking with Jennifer Borr, I felt sure that she was going to be able to improve some of my daughter’s behavioral issues among other things. We went to the center and also received in home therapy and both have helped so much! She now receives speech and OT as well. I feel like I’m raising my daughter with these girls and I love them for all they have done for my little girl!”

“Over a month ago, I searched online for possible options near the Downtown or Coconut Grove area for therapy specializing in ABA services and speech. I was extremely fortunate in finding Shine Bright Therapy. They assisted me immediately in setting up an appointment for an evaluation. That next week he began his new journey with his therapist Jennifer. Three weeks in and I have seen phenomenal progress in his vocabulary and ability to express himself. This goes far beyond being an aid in speech. In regards to payment, they accept insurance for occupational and speech therapy. They are willing to work with you on your schedule. An absolute great quality of a wonderful business.”

“I love the office and staff… My 9 year old non-verbal autistic son is starting to repeat words!!! something he never did before and I never thought I would hear! my sons team works very hard and they constantly communicate with me. Thank you Jen and all the staff who work very hard on my son!”

Read our interview with The Florida Keys Free Press

Read our interview with VoyageMIA Magazine! 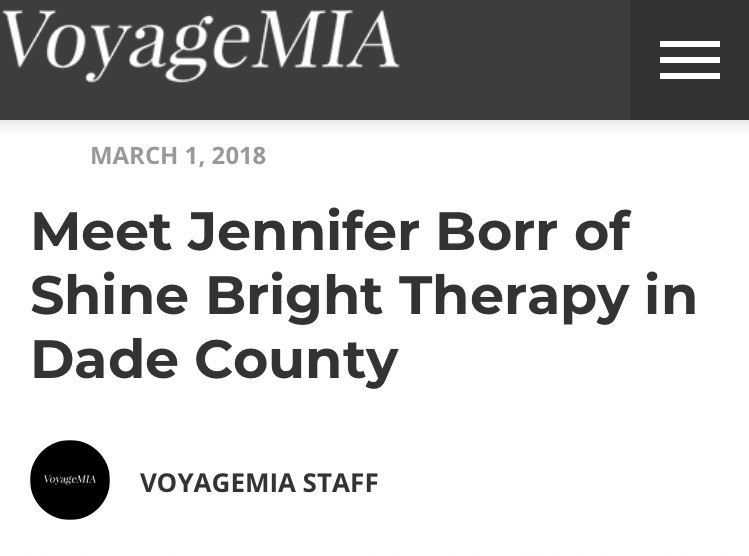